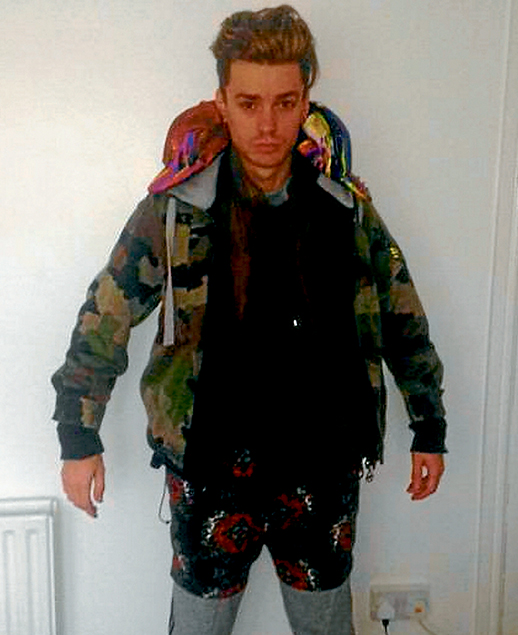 I take it all back; every last word. For years I have poured scorn on anything that looked like a boy band. I have derided their musical output and questioned their artistic integrity. I have dished out piping hot spoonfuls of opprobrium. I ridiculed the way they dressed, danced and the dreadful songs they sang. Not anymore. I have officially seen the light. For I am now convinced that these confected groups are the repositories of the true rock and roll spirit. This change of heart is not the result of a song or even a particularly challenging dance manoeuvre but is all thanks to one man, or boy, if you prefer. Namely, one James McElvar.

I’ll be the first to admit that I’d never heard of the boy band Rewind. I don’t own any of their albums, have never visited them at ‘Soundcloud’ and, if I’m being completely honest, wouldn’t recognise the group if I tripped over them down at the local fruit and veggie shop. But Rewind is a real group and James McElvar is a member. More than a mere boy band, they are carriers of the torch that has been passed from one generation of rock and roll outlaws to the next.

The group was catching a flight from London to Glasgow. Young James was informed he had one more carry-on bag than he was allowed. His options were limited: he could either pay a forty-five pound fee for the execrable crime of having excess baggage, or he could dispose of his bag altogether. James, however, saw a third option. Young McElvar was not about to be pushed around by the powers that be – that’s not what rock and roll is about. Instead, like generations of musicians before him, he decided to stick it to The Man.

Rather than abandon his surplus suitcase, James decided to wear the entire contents. This meant donning six T-shirts, four jumpers, two jackets, one pair of shorts, three pairs of jeans, two pairs of jogging pants and two hats. It was the ultimate fashion statement, a statement that also said, ‘you can try and charge me forty five quid, but you can never tame the music.’ But as stylish as it was, it significantly impeded young James’s attempts to walk to the aircraft. Things only got worse once he was on board.

In the event that you decided to dress up like the Michelin Man, fair warning: you may experience difficulties putting your seatbelt on. Not only was James unable to comply with even the most straightforward requirements of the in-flight safety demonstration, he started to overheat. By ‘overheat’, we’re not talking about the occasional droplet of sweat but the kind of meltdown you normally expect to see when the Wicked Witch of the West gets drenched. The boy was positively melting.

Airline cabin crew are prepared for almost anything, including overheating boy band members. Responding to the urgent situation, the crew took off the extraneous clothing – a process which must have felt like peeling an onion or a gigantic boy band version of ‘pass the parcel’ – and laid the stricken passenger down on a row of seats. But it was to no avail. James was violently ill and then fainted. Now that’s what I call rock and roll. The only thing he didn’t do was kick over an amplifier and toss a pair of drum sticks into the audience.

There’s not nearly enough of this kind of thing these days. It used to be that acts of rock and roll defiance were reported on a daily basis. I can still recall the furore surrounding the refusal of Jimi Hendrix to touch off the number 67 tram to Carnegie. And the time Pig Pen from the Grateful Dead failed to cast his vote in the Stonnington Council elections, to say nothing of the day that Jim Morrison ‘forgot’ to say thank you after a particularly tricky merge onto the Monash from the Warrigal Road on-ramp. I had thought we were never going to see such brazen acts of rock and roll debauchery again. I am happy to be proved wrong.

In a way, James has reminded us all of time when rock music meant something. His actions in trying to dodge an excess baggage fee recall an era when the music of youth was about non-conformity and rebellion. My hope is that it doesn’t end here. Perhaps other musicians will be inspired by this simple but lonely act of insurrection and will find their own way to stick it to the man. I look forward to the day when Taylor Swift refuses to offer her bags for inspection and Harry from One Direction takes the ticket he got for overstaying his welcome in a two-hour parking spot and sets it on fire, Hendrix style, before kicking over a postbox to make his point.

Clothes maketh the man. In this case, clothes maketh the man feel very, very ill. Luckily for all, James McElvar has recovered but I hope he’s learned something. No doubt he’s received plenty of criticism for his actions. This misses the point. Before news of this event, I’d never even heard of James or his band, Rewind. In fact, I am yet to hear a lick of their music. In that sense, I think James may well have achieved more than he set out to. For me, I can only say that I am looking forward to the next exciting rock and roll adventure from James. Rock on.