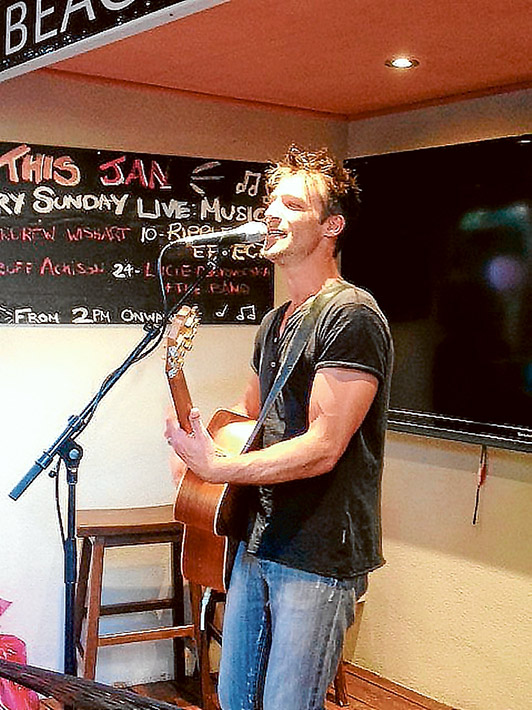 JUSTIN McLaren is one of those unassuming butt talented individuals who has been operating “undercover,” so to speak, for years as a producer and engineer. He’s helped hundreds of aspiring musicians produce and record original albums for public recognition.

He kick-started his love affair with music at the tender age of 13, way back in 1984 after landing his first professional job in musical theatre with the production of Oliver at Her Majesties Theatre in Melbourne.

It was his first audition, incidentally earning him a four month crash course in professionalism, along with setting the bar at the highest level for all subsequent endeavors.

With the thrill of applause, the joy of performance and the soul of music now firmly embedded, McLaren started playing in blues/rock bands around the suburbs, honing his licks by gigging at parties, dingy inner city pubs and the occasional Battle of The Bands.

Age 18 saw him gigging in Top 40 cover bands, which was to dominate his life for the next ten years.

It was in 1995 that McLaren got the chance to produce his debut EP with the help of Mark Rochelle at Back Beach Recordings. He self funded the effort, discovered the joy of being an original artist and got hooked by the recording process. He continued to spend the next three years writing and co-writing songs in a number of fledgling indie bands.

Says McLaren, “I had my heart set on being a producer, so I went to school to learn. At Box Hill College of Music my principal instrument was my voice, so I paid for my student lifestyle with my guitar, and by freelancing in improvised funk, soul and jazz bands.

“When school finished we made a record together under her name, Ange Caporaso and bought our own equipment. We opened a studio in Moorrabbin and called it The Tone Factory.

“Not long afterwards we created the Melbourne Rock School Freeway Community Choir and offered teaching and coaching for aspiring artists. We saw the likes of Andy Phillips from Cadillac Walk and Nicole Nehemia of Safari Motel.

“I like to do acoustic vocals and rock covers from the ’70s to present day. I cover most genres and have been doing it for the past 30 years!

“My original material is melodic and acoustic – I tend to get inspired from life experiences and inject insight into the tunes I write.

“I use it as therapy, so to speak, as I write about things I’d like to change in society and my own life. Things like the complicity we have towards life as a society, which for me is actually irritating. Things like consumerism and the fact we are all running around in this little ant farm we call the western world and think its so wonderful. However, we’re really all slaves to money and all that sort of stuff.

“There is nothing bad about money, but in the pursuit of it, if we don’t go deep enough we quite often miss our calling.”

For the last 15 years McLaren has been working more on the tech side by helping younger artists connect their instruments to their souls, enabling them to have a deeper musical experience and finding the core of their sound. He feels it refines his skills too.

“The reality is you have to connect with what is true to you, and all musicians have different musical experiences which they eventually become the sum of.”

“So who is Justin McLaren?” I asked.

“That’s really a very difficult question. What makes me shine though is giving joy to people when I sing as I really enjoy it.

“My future vision doesn’t include a master plan, as I don’t want to conquer the world like I did when I was a young boy. I just want things to happen with quality. I definitely want to leave a mark as I have family that relies on me to some extent. Also I have to keep the artist heart alive which is kind of difficult to do when you have mortgages and stuff. The greatest challenge of the last decade has been figuring out how to do that; how to live in this world and be true to yourself.”

I quip in with “be of the world, but not in it, I guess,” to which McLaren agrees and says, “of the world and not in it… a beautiful way to say it.”

You can catch Justin McLaren gigging at Beach 162 on a regular basis as well as The General Wine Lounge in McCrae and busking the streets of Frankston as a form of “boot camp” for his voice.