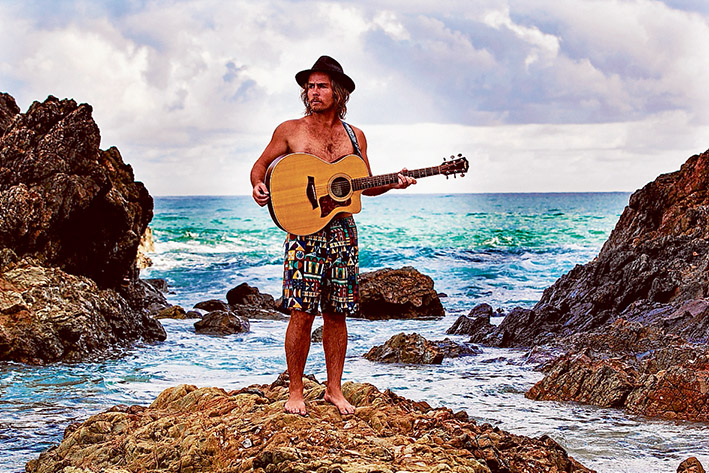 Compassionate, sensitive, and soulful lyrics imbued with life’s experiences are probably the best words to describe music sensation, Andy Jans-brown’s tunes.
Creating a rich tapestry of diversity within his song writing and collaborating with experienced musicians, Jans-Brown is certainly forging an exceptional musical path with superstar stamped all over it.

Hailing from Byron Bay, Jans-brown embodies that arty, hip and ever so cool vibe in his dress sense, manner and outlook on life. He knows what he’s about and goes about doing it.
Recently he finished the last leg of his successful East Coast tour with a few gigs in Melbourne and on the Mornington Peninsula. All of his shows were well received due to his huge and still growing fan base. And I can see why. With song lyrics laced with soul and deep insights of life, and as one who has seen death and experienced life’s punches, his words shoot at the heart and touches a cord within.

His latest double album Sunshine Avenue reflects all of this, says Andy.

“I’m rapt you picked up on the cleanness of the CD and sound. Although it is mostly a rock n roll album I still wanted the human touch. I tried to keep it honest in it’s production. As you said about watching RAGE and seeing so much gore and let’s face it, when it’s not gore and zombies it’s the objectification of women, there is very little heart being expressed in mainstream music – for me music is the heart beat.

“All of my favourite artists share a common humanity, whether it be the poetics of Leonard Cohen or the wit of Tom Waits or the soul in the voice of Stevie Nicks, you can hear that human quality.

“As with high-end rock it seems to have lost it’s human touch, and I’m all about connecting with humans, not alienating them.

“There’s so much fear in our culture. In fact a great book to read is Naomi Klein’s The Shock Doctrine in terms of how fear is being used to control us on a daily basis.

“I teach music and I’ve used music therapeutically in outback Australia with the kids who survived the bush fires. I believe in music’s ability to heal.

“With songs like Into the sun from my Letting Go album which was written about my life affirming trip around Australia and that whole ‘Carpe Diem’ spirit, and to the message in Sunshine Avenue of reminding us to be awake, to live life true to our heart and to turn away from the manipulation of the main stream media propaganda machine, and connect more deeply and honestly with those around us.

“This is my message, my truth and I believe the best thing I can do for this world is simply be me and encourage others to find the meaning of their lives too.

“After losing my brother and my mother I see clearly that the only gift we have in life is ourselves – all the struggles, everything, the whole deal – it’s what makes us who we are, and that is our gift.

Every burden is a gift and every gift a burden. This is what my 44 years on planet earth has taught me.”
Dressed in a woman’s clothes from his first double album, Letting Go starring seven times award winning Logie actress Paula Duncan, came first on Triple J unearthed Indie chart and sat at number one for over a month.

It’s a delicate story about a woman growing older reflecting on loss of youth, health and other stuff to the eventual coming to terms with it and discovering her own personal power.

Jans-brown imbues vivacity and positive vibes into his performances, leaving you with a sense of satisfaction at the completion of his gig.

I guess the end result speaks for itself, cause his positive life attitude certainly reflects in his songs and lifestyle. Make a point to go see him next time he’s down our way.

Both of the double albums, Letting Go and Sunshine Avenue can be purchased by contacting Jans-Brown at: