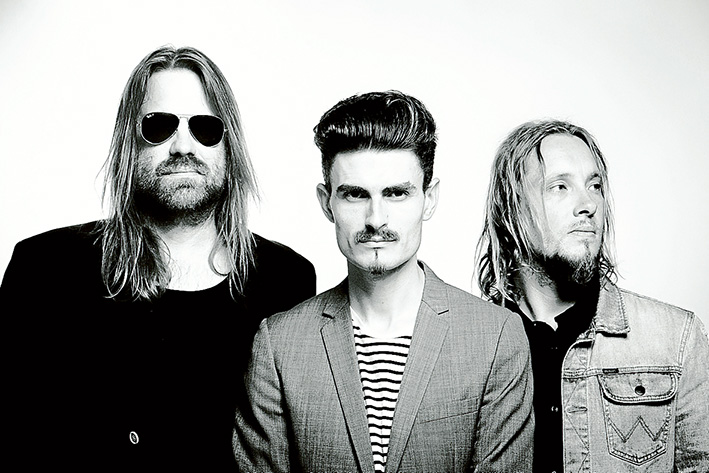 “I don’t know if anyone really thinks five years ahead in any tangible way… I’ve taken a long term approach to being a musician and my career with this band.” It’s a solid answer to a seemingly innocuous question asking what Rai Thistlethwayte has been doing with his life over the last half-decade or so. Far from laying low, hiding from the spotlight in some small outback town, Rai’s been immersing himself in the musical culture and cultural music of Los Angeles.

“Like any lengthy project, you’ve gotta do a little reinvention, a bit of maintenance along the way, and sometimes that actually means stepping away from it all for a little while.” Away from Australia and Thirsty Merc, perhaps, though there have been rendezvous. But not away from music altogether. It’s this continued contact with the creative process, coupled with an old-fashioned travelling holiday, that’s filled the tank of their well-tuned musical hot rod. Thirsty Merc are back for a follow-up tour to last year’s album launch gigs. “The overseas travel was something I never got to do in my 20s… while my high school mates went overseas, I had my head down in a music project.”

Living in Los Angeles between 2012 and 2014 for the bulk of the time, Rai never left the band, and the band never left him. “I did a few solo gigs and a bit of song writing, and I worked as a session musician as well… part of it was somehow tied to the music career, I got to step away and get a bit more perspective on things, which really helped me have a fresh head when I came back for the fourth full-length album.” Hey, we all need a holiday from time to time, and he gracefully acknowledges missing out on the globe-trotting Aussie cliché in his 20s.

But is Shifting Gears a new chapter in the book, or another adventure entirely? “You know that old saying, if it ain’t broke, don’t fix it?” Clearly, a new chapter is the choice description. Explaining the reasons, it makes perfect sense. “There’s a lot of good things going on with this band. We’re great musicians, great friends, we have a great synergy sonically when we play live… and because I’m a bit older than before, maybe I’ve added a bit of maturity to some of the song writing. In other areas, possibly not, I might even have devolved… but your scope definitely opens up with more experience.”

Despite calling the tour Back to the Grind, Rai insists they’ve “turned a corner into 2016… the gigs will be great, we’re still in the game, we’re still playing live, it’s been the busiest 18 months of my life!” It’s definitely a positive for the band’s collective psyche, especially after the tragic loss of their stage manager Shane Cooper in a traffic accident while touring Victoria late last year. It nearly claimed drummer Mick Skelton, too, who was comatose for five days after the incident. Their Warrnambool show was rescheduled and the twisted irony of Thirsty Merc’s Good Life Tour fell on the band like a pallet of bricks.

“…in a way, we bonded through it,” Rai says. Despite his brush with death just weeks ago, tour drummer Mick Skelton is back in the hot seat. “He’s made an incredible recovery and he’s actually going to be playing drums with us at The Grand! I hung out with him the other night, and he said ‘this is the tour I never got to do’.” Loss, or rather the shared pain that it carries, is a powerful force, one that’s only strengthened the bonds between the elements of Thirsty Merc. “He’s got the most inspiring attitude ever and I’ve been blown away by how well he’s doing. You’re never going to change what happened, but we’re thinking pas positively as possible and we’re moving forward.”

The show at The Grand in Mornington will be part of their second tour for Shifting Gears, this time under the second single The Grind. The album took some doing, so it’ll be interesting to see whether the intervening years and events have changed their stage dynamic. Rai insists not, highlighting their revamped creative process. “Entertainment and information being so global does have an influence, but another factor was doing the previous three albums with a record label – Warner Music. They’re a fantastic company, but we decided to go out on our own for the acoustic album… that was such a great experience that we took it further, doing this whole new album independently.

That required a little creativity, the kind some well-established musicians forget is their stock-in-trade. “We did a crowd funding campaign, all the organisation and financial backing for it ourselves and we put it all together. That can be daunting, even terrifying on certain levels because you’ve got to foot the bill for everything yourself, and you’ve got to be organised.”

As to which method is more productive? “The jury’s still out on that one. I’m still learning all the time, but I’ve also been pleasantly surprised by how much you can really do – I strongly believe that you can make as good, if not a better product on your own, if you’re prepared to do the work. That’s not saying labels are bad or that you can’t make a good album with a label, any scenario is possible either way. But at our particular time, age and stage in our development as a band, we were ready. When I started the band with my best mate Phil, I was 22 – now I’m 35.” You have to be willing to take a risk some time.

As a “slightly more responsible human being,” it’s paid off for Rai. “I know more about the industry, I can make sure we’re getting everything done and I can still remain passionate about the music and keep the creativity at full-pump.

See it in the flesh at the Grand Hotel in Mornington on Friday, 22nd April.