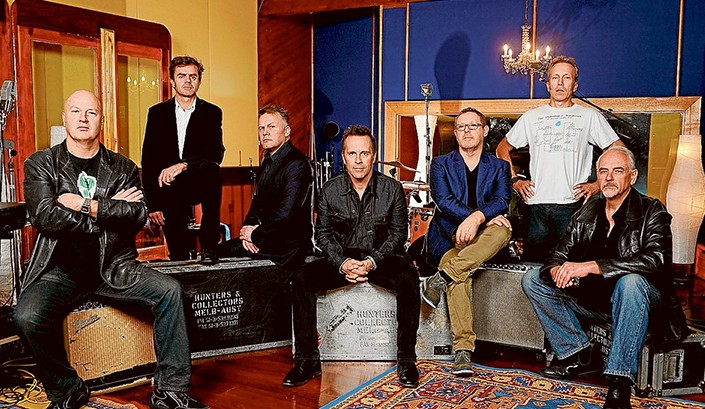 They are anthems for a generation, songs that define an era in Australian music.

More than three decades later, that statement is a neat summation of the new Hunters & Collectors collection, which is simply titled Anthology.

These 40 songs tell the tale of a remarkable 18 years, from the band’s early alternative days at St Kilda’s Crystal Ballroom – when Rolling Stone magazine dubbed them “White punks on funk” – to their years as a touring machine, playing to the suburban masses in sweaty beer barns.

“We felt that if we couldn’t convey something to normal people who work nine-to-five then we might as well forget it,” Mark Seymour explained in 1985.

This was an Australian band unlike any other. Their unforgettable debut single, Talking To A Stranger, was inspired by Charles Baudelaire’s The Albatross; the timeless Throw Your Arms Around Me is the Aussie classic that was recorded three times but was never a big chart hit; The Slab is an ode to onanism; while a song about Napoleon’s chef, Holy Grail, ended up becoming a footy anthem.

This is a story of egalitarianism. The collaborative energy of a rumbling rhythm section and the blistering Horns of Contempt, with songs that captured the brutal beauty of the Australian landscape.

For a generation of punters, these songs provided the soundtrack to their gig-going years. A Hunters & Collectors gig was a tribal experience. Paul Kelly remembers seeing the band in the 80s, when they were “gathering an army”.

“Their audience was mainly young men, hungry for devotion,” Paul observed in his memoir. “Hunnas had a big, fat industrial bass sound, an anthemic horn section, and their singlet-clad singer, as fit as a trout, held nothing back.”

“They defined new parameters for Australian music,” critic Toby Creswell wrote when he was editor of Rolling Stone. “And Mark Seymour’s lyrics captured the Australian experience in a way no other writer has.”

Anthology – culled from the band’s nine albums – follows the Hunnas’ live re-formation, which coincided with the chart-topping tribute album, Crucible, and saw the band perform at the AFL Grand Final and do shows with Bruce Springsteen and the E Street Band and The Rolling Stones. The tour won the 2014 Helpmann Award for Best Australian Contemporary Concert, but the band is adamant there will be no new Hunters & Collectors albums.

This is it. And Anthology shows why Hunters & Collectors mattered – and why they still do.