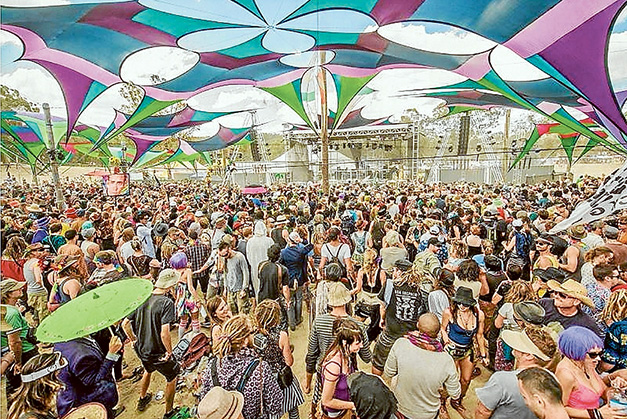 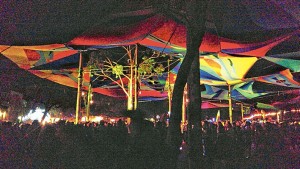 It was everything I dreamt it would be and more. Even the music, which I’d expected would be of a hippie bent, was varied and danceable. Psytrance with endless triple drum beats? Check. Circus tent with lunatics using classic rock as the background for an aerobics class? Check. Conventional dance music across a variety of stages? Double check. There were so many events over the course of a very long four days that to document all of the with accuracy wasn’t possible, so I’ll try and limit myself to highlights.

Hell, there was so much to do there that you could entertain youself for the entirety of the festival without even approaching the beats. Food caravans from every corner of the globe formed an orbital course that linked the stages, and given the effort involved in some of the setups, I’d have to say it was very reasonably priced. It wasn’t only food, either – I came away with a very colourful bandana and a poncho that’s basically a rug with a hood, surprisingly comfortable in all conditions.

We found ourselves perched at the top of the northern camping grounds, in the most comfortable makeshift base one could imagine. So comfortable, in fact, that I chose to forgo sleeping in my extremely comfortable Falcon GLI and slept insted on a couch, not quite under the stars but always with a barmy breeze breathing through the dome of LED Christmas lights and tarpaulins. It’s a good feeling, making it comfortably without the precious commodities of hot water or electricity. 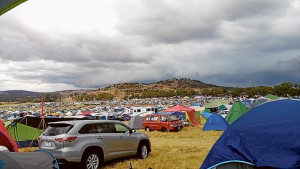 And precious commodities they were. 3-minute shower tokens had to be purchased from administration, and there was a strict limit of two per customer, for a total of 6 minutes under running water. Long queues were a regular sight at the shower blocks, so I threw hygiene to the wind and showered in fresh country air instead.

I wasn’t alone, either. The scent on the dance floors/sandpits/mudflats was 99% human sweat, with a smattering of alcohol and dust. Normally this would be enough to make me reach for a gas mask, but somehow knowing your contribution to the aroma is on par with everyone else’s is comforting.

Far away from our family-sized lean-to, on the south side of the festival area, was an enclave of smaller but equally well-constructed “themed campsites,” A.K.A. mini-serpents. Though I only made it out there twice, they were every bit as action packed as the main event, minus the option of eating when your feet tire of the boogie. The sheer variety of musical, cultural and culinary experiences was staggering, and goes a long way to explaining Rainbow’s longevity. 2017 will see the festival celebrate its 20th anniversary.

But no matter how much peace, love and environmental responsibility you try and cram into your event, there will always be a few put off by your event. Lexton’s permanent population tops out at about 150 – the town is small and primarily agricultural. But the festival pours a hell of a lot of money back into the community, with the local football/netball club having its own stall. They sold food and convenience commodities, and it just happened to be the biggest building in the market.

Victoria Police, however, have a predictably different view. They are “fed up,” calling the festival a “fiasco.” The cops patrolling the camping grounds were clearly having a good time (no, not on drugs), so this press release is obviously straight out of head office.

In the most extreme attempt to influence the political debate I’ve ever seen from a public servant, Inspector Bruce Thomas said “Every year we see the event take place, every year we raise our concerns and every year we are left picking up the pieces… It’s painfully obvious that there are huge direct and indirect risks to the community as a result of the behaviour that takes place at the festival,” before claiming it was nothing short of “a miracle that no one was killed on our roads given the number of drug drivers departing from the festival.”

I’m the last person to condone drug driving, but the eminently responsible organisers actually provided on-site alcohol and drug testing kits, allowing a not-insignificant number of drivers to pull over near the paddock exit and wait until they were deemed OK to drive. It’s something that should be mandatory in city clubs, given the ice- and alcohol-fuelled violence and road trauma that occurs in Melbourne with depressing regularity. Organisers and toxicologists have since stated that of the 900 people seen by medics at the event, only 5% were related to the consumption of drugs and alcohol – better stats than your average suburban emergency ward.

Nothing of the sort occurred at Rainbow Serpent. Festival goers knew their limits and got along with each other like a house on fire. Even with alcohol in the mix, there were no “pieces” to pick up and the lowest point would have been the four people that spent a night with paramedics after going just a little too hard.

If I can be dangerously honest, this festival is the greatest argument for the decriminalisation of drugs I’ve ever witnessed, and if a few extra harm-minimisation measures were permitted, could be a working model for a party where judgement is absent, freedom is integral and love for your fellow humans and the environment that sustains us is mandatory.