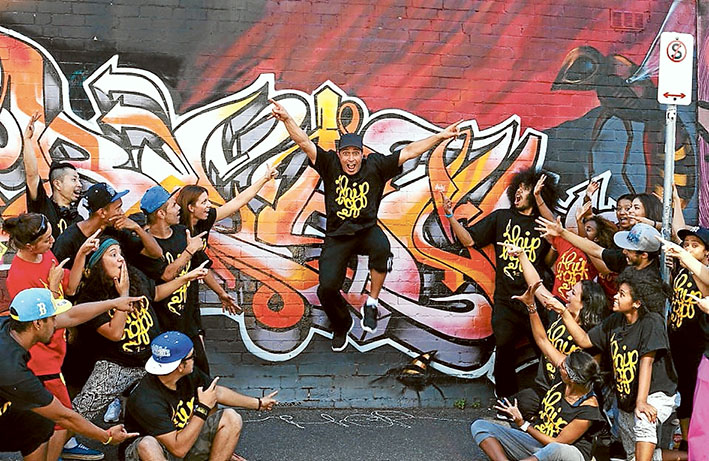 Prepare to be amazed when Indigenous Hip Hop (IHHP) arrives on the Mornington Peninsula, champing at the bit to energise crowds on Australia Day at Mornington Park.

The interactive hip hop works on the principle of using “arts for change,” focusing on young Indigenous people’s strengths, developing their skills and attitudes and working closely with partners to support community development.

The group started about 10 years ago with two young guys, Michael Farah and Dion Brownfield, who wanted to use dance as a medium for change.

“Around about 2006, Dion and I met at a festival in a remote community in WA, and worked out that we had a great opportunity to use youth dance as a medium for change, taking it to remote communities and local festivals all over the country,” says dancer and choreographer Michael. The multicultural group attracts both indigenous and non-indigenous members. “Basically it snowballed to going from five artists and now we have about 40 artists, dancers, music producers, film makers, artists, rappers, singers and we’re still doing the work we do, which is going to communities, and festivals.”

IHHP uses dance as a tool of engagement, encouraging participants to have a lot of fun and learn about health issues and the heritage of Aboriginal and Torres Strait Islanders, the world’s oldest surviving society and culture.

“It’s not too heavy, it’s a celebration, and we focus on the good things… working for people, explaining the reality of drinking, smoking and bullying, for example.”

IHHP believes that in order to work towards ‘Closing the Gap’ and address disadvantage faced by Indigenous young people, programs need to support the development of physical, social and emotional wellbeing.

“Hip hop gives young Indigenous people and their communities a voice, to not only let their issues be heard but empower them to find their own solutions. Through its projects, IHHP fuse Indigenous culture and the youth sub-culture of hip hop to engage with and develop skills and confidence in young Indigenous people. We celebrate Australia’s cultural diversity,” said Michael. “The artists use the power of hip hop, modern dance, music, art and other media to engage with and develop young people, hopefully to influence positive change in their lives.”